Posted by izzy-grabs-life on October 13, 2015 in Challenges, Writing

Big thanks to Priceless Joy for hosting Flash Fiction for Aspiring Writers (75 – 175 words) and Sonya for providing the inspiring photo prompt this week. If you haven’t heard of or joined this challenge, please do yourself a favor and check out PJ’s blog for more details and entertaining entries. You won’t regret it. 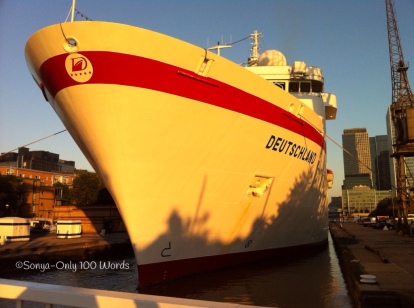 Now onto the story:

With a flick of my wrist, a tidal wave towers over the redheaded bimbo’s ship. How could my beloved prince ever sleep with such a dimwitted human who would stand there gasping, instead of running away from danger?

I sneer as my wave knocks the redhead down. Her face smacks against the deck, leaving a bloody trail behind as the water wraps around her ankle and drags her off the ship.

My water engulfs her, pushing from all sides. She thrashes her arms and legs wildly, and I can almost imagine the sweet burn in her lungs.

“Don’t fight it,” I whisper, forcing her mouth open from a distance.

The cold water floods into her. Voilà, no more struggling. Blood seeps out of her nose and mouth and pollutes the ocean with red swirls.

I order my mermaidens to clean her ship and sneak her limp body down to my shimmering castle. With tasty spices, I’ll feed her to my prince, make love to him, and then consider becoming a widow.

As a side note, I wanted to share my thoughts for other flash fictions inspired by the photo prompt. NONE of them worked out for me, but hey. The first one was a “The Day After Tomorrow” type of story.

The second one started off with a skittish character who’s too scared to get on the ship. That person would have said, “I’ve seen Titanic. I know how this ends.” 😛

And the third was about zombies overtaking a ship.

But yeah, I ended up setting those aside and going for the wicked mermaid.